How Precise Do Numbers Have to Be?

Last night (technically this morning at like 4 am), I randomly thought about this tweet I saw a day ago:

Hi, Twitter. This is the magic of an 84" softbox. pic.twitter.com/VP5GOgSQI9

I thought back to when I shot a video in my room and got a similar lighting effect as that. It wasn’t as glorious, but it was impressive for nothing but natural light. My friend was trying to set up a similar shot as me, but even with additional lights, he couldn’t recreate it. It may have been partly due to the white closet door that was bouncing light from the window to my face, or the perfect amount of sunlight coming into my room, or even just pure luck, but somehow I got nice, even lighting.

For some reason, at 4 am, I focused on the quantity of sunlight on that exact day. To be precise, I would need to know the date, time, and exact latitude of my room (longitude is not necessary since I have the date and time). The date and time were easy – I could just look back at the metadata of the video. But the coordinates are what interested me the most.

When a point is clicked on Google Maps, the coordinates are shown at the bottom. This random coordinate is Point Nemo, the location in the ocean that is farthest from land.

Does this difference matter?

First, let’s see how much one degree is in terms of miles (normally, I would go with SI units, but trust me on this one). Assuming that Earth is a perfect sphere (it’s not but math is easier this way), the circumference is 24,901 miles. Dividing by 360 degrees gives us a rounded number of 69 miles per degree of latitude (nice, I told you to trust me on this one). A difference of .00001 is ten-thousandth’s of that, which is 36.432 feet.

I’m saving the first question for some other day, since it requires more math and there’s probably too much of it here already. So let’s focus on precision instead.

I memorized 12 digits of π: 3.14159265358. However, I really only use three digits in math class (3.14), and sometimes five if I feel like it. (Get your e = π = 3 jokes out of here.) For really precise calculations like satellite orbits or really, really, really expensive 3D printers, it would be better to have like 100 decimals of precision.

This JPL article actually shows how many decimals are actually used. Using 15 decimal places of π, the circumference of the Earth…

… would be off by the size of a molecule… Another way to view this is that your error by not using more digits of pi would be 10,000 times thinner than a hair!

It also mentions how using 40 digits of π to measure the circumference of the observable universe would yield a result that is accurate to the diameter of a single hydrogen atom. That’s quite insane to think about.

It guess it sucks that most of the numbers at the end of calculator won’t matter in the end, even though I write it all out on tests anyways. On the bright side, I only need to know 4 more decimals of π to work at NASA!

Of course, I have to end with a relevant xkcd. 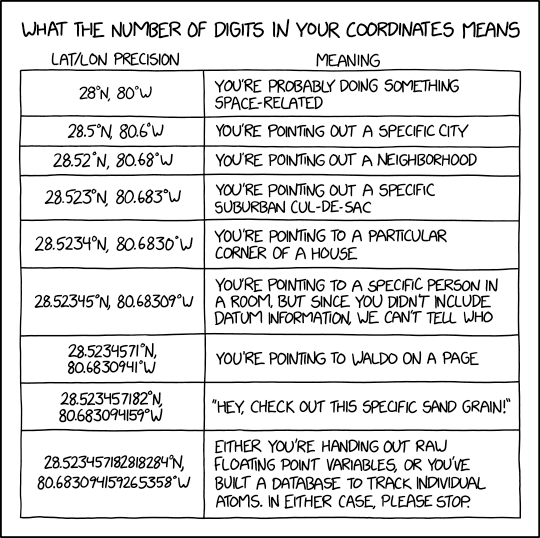